On Friday, 27th September 2019 6 million people joined the strike against climate change around the world.

In Vienna 80,000 people participated at four different meeting points met at Karlspatz and marched to Heldenplatz.

2 million people walked out of schools and workplaces to protest for the climate change. “We showed that we are united and that we, young people, are unstoppable”, Greta Thunberg said in New York City on the 21st September 2019.

Greta Thunberg started these strikes. She is a great climate activist!

written by Charlotte Dawid, 2.a

80,000 people marched through the city of Vienna demanding climate justice.

On Friday the 27th September, 80,000 people in Vienna hit the streets, striking for urgent action in the climate emergency. The people met at three different meeting points. They started to march to Karlsplatz, where they all met. Together they continued to Heldenplatz. That’S where the strike ended.

Among the protesters there were students from BRG 14. For some students it was their first time striking for something they believe in.

A lot of people held posters, showing huge support for the earth. The kids lost their voices, because of the screaming. “Wir sind hier! Wir sind laut! Weil ihr unsere Zukunft klaut!“ That’s what they were chanting.

Where will this chaos lead us?

Written by Youssef Ebeid, 2.a

On Friday, 80,000 people hit the streets in Vienna

“We showed that we are united and that you people are unstoppable” said Greta Thunberg at the UN Youth Climate Summit in New York on 21st September 2019.

On Friday, six million people had taken to the streets, uniting over time zones, cultures, and generations to demand urgent action on the escalating ecological emergency. In Vienna there were three different meeting points, Praterstern, Westbahnhof and Hauptbahnhof. They all met at Karlsplatz and continued together to Hofburg. “We want you to act like your house is on fire, because it will, “ said Greta Thunberg in New York. The children at the protest in Vienna held up posters with messages like “S.O.S. Save Our Seas”, “Lost Nemo!”, “Früher war der Fisch in der Packung, heute ist die Packung im Fisch” or “Euch gehen die Ausreden aus, uns die Zeit“ and they shouted “What do we want? Climate justice! When? Now!”. The global climate strikers say their action is a sign of the growing awareness and anger of the severity, and scale of the climate crisis among people around the world.

Written by Lukas Kandler, 2.a

On September 27th 2019 over 80.000 people demonstrated in Vienna for stopping the climate change to have a better future.

Most of the activists were kids, teenagers or young adults. This all started with Greta Thunberg who protested in front of the Swedish parliament every Friday. The, back then 11-year-old girl, got a lot of attention from the public and so they started to participate.

In Vienna over 80.000 people demanded change in hope for a better future. They all met at Karlsplatz and then walked together to Heldenplatz. ÖBB posted a picture how Westbahnhof looked before and the demonstration and after it and you can see that there is no trash lying on the floor.

Also the whole BRG 14 school participated in the climate strike. They had posters and contributed loudly to the success of the event.

Written by Miriam Schäfer, 2.a

80,000 People Hit the Streets in Vienna to Strike About Climate Change

On Friday the 27th of September 2019 80.000 people walked through Vienna to stop climate change. Most of the protestors were kids and striked for their future.

For those who don´t know Greta Thunberg, she is the girl who started this event. At the age of 8 she understood that the climate is getting worse and worse and that we have to do something about it. When Greta was 15-years old she sat down infront of the Swedish parliament and striked against climate change. Every Friday when she was striking more and more people started joining her. Now she gives interviews in NYC and all around the globe. For your information she does not fly with an airplane to reduce her carbon footprint. I think she is a huge inspiration to us all.

Written by Enya Sengölge, 2.a

On Friday the 27th September, Vienna was in the fight (protest) against climate change. On the same day , 6 million people across the world protested, thanks to the“The Greta Effect´´.Tens of thousands of people in Vienna marched out of schools and workplaces to join the protest to stop the climate crisis.

The great BRG 14 school participated in the strike. 2A were also filmed and appered on TV. Everyone marched from Westbahnhof, Hauptbahnhof, Praterstern and all went in the direction of Karlsplatz and afterwards to Hofburg.

At the protest, there were all kinds of slogans written on signs made of cardboard, or sprayed on sheets. One of the phrases was “Shi* on school to make Earth cool“. The one who started this movement was the young climate activist Greta Thunberg, who started “If your house is burning, you should panic“ and she quoted as saying “I shouldn’t be up here, I should be in school on the other side of the ocean.“

She first striked alone, in front of the Swedish Parliament aged 15.
Young people are starting to think about the climate and are acting such as reducing plastic or cleaning places where it is very polluted. Plastic is harming our marine life. Litter plastics are also toxic to land animals, because they occasionally eat them and die. Not only has plastic been our problem, carbondioxide, increasing sea levels, expansion of deserts and heat waves are also our biggest enemies. How can we save our planet? How can you save the planet? Take responsibility and help save the planet!

Written by Kevin Verma, 2.a 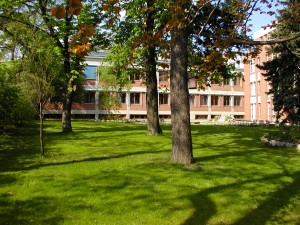